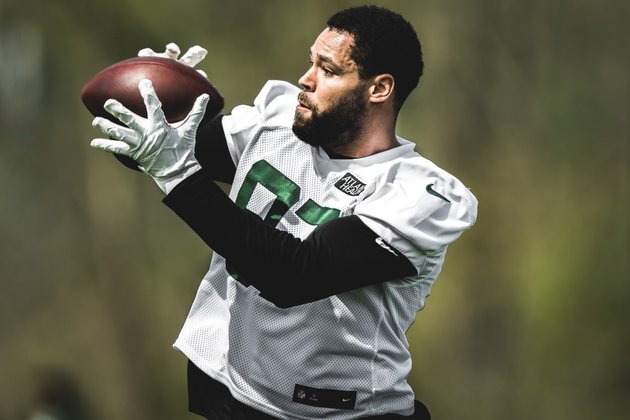 Where Have the Jets Improved the Most this Offseason

Throughout the offseason, NewYorkJets.com reporters Eric Allen, Ethan Greenberg and Randy Lange will each give their predictions to a series of questions regarding this year's Jets.

Today's question: Where have the Jets improved the most this offseason?

EA: This is a vastly improved roster across the board. In terms of position groups, the cornerback and tight end units have seen dramatic flips. "Playmaker" isn't a position group, but the Jets also filled a big need in that department. If you add health into the equation, how about the edge unit? The Jets expect Carl Lawson back for training camp and he was dynamic last summer, looking like he could be a game-changer in this defense. The Jets were elated to move back into the first round to get Jermaine Johnson, who was dominant with more opportunity at Florida State, has an arsenal of pass rush moves and is strong against the run. Micheal Clemons is a great system fit with his length and power. And that's not even mentioning the re-signing of Vinny Curry plus the free-agent addition of Jacob Martin. At TE, C.J. Uzomah and Tyler Conklin combined for 110 receptions for 1,086 yards and 8 TDs last season, and then the Jets came back in the third round and selected Ohio State TE Jeremy Ruckert. Offensively, the Jets don't just want to matriculate the ball down the field. Garrett Wilson (23 TDs in 33 games at Ohio State) and Breece Hall (11 school records at Iowa State) are sub 4.4-players who have the ability to help second-year QB Zach Wilson & Co. score pointsin a hurry. With all that lead-up, give me the cornerbacks. I love the dynamic the Jets will have on the outside with Ahmad "Sauce" Gardner and D.J. Reed, the former being an ultra-long, competitive performer didn't give up a TD on the collegiate level, and the latter being a feisty 5-9 outside CB who reunites with Robert Saleh. These two dudes have New York personalities, they're going to get in receivers faces for 60 minutes and challenge. The pair headlines a young group that already includes Bryce Hall and Brandin Echols on the outside plus impressive nickel options Michael Carter II and Javelin Guidry. There is no wrong answer.

EG: The two positions that stand out are tight end and cornerback. The Jets tight ends combined for 50 receptions, 534 yards and 3 TDs in 2021. General manager Joe Douglas signed C.J. Uzomah and Tyler Conklin in the offseason, who combined for 110 receptions, 1,086 yards and 8 TDs last season. Uzomah and Conklin are both NFL starters and are capable of stretching the field and helping in the run game. Uzomah also adds championship pedigree, coming from the AFC champion Cincinnati Bengals. At corner, Douglas added D.J. Reed and Ahmad "Sauce" Gardner to the room. Bryce Hall, who led the Jets with 1,169 snaps on defense last season, and Brandin Echols, who was fifth was 760, could each be fighting for playing time if the room is fully healthy. Hall and Echols both came on strong toward the end of the season, too. Douglas created a lot of depth and speed to the secondary in a division that has Stefon Diggs and Tyreek Hill. I think almost all of the positions received some depth and a boost from either free agency or the draft e.g. RB, WR, OL, S but tight end and cornerback are the two with the largest facelift.

RL: Where else but tight end? C.J. Uzomah and Tyler Conklin (stop me if I told you this one before) have brought with them a combined 110 catches and 1,086 yards from their teams last season - the last time the Jets had close to those returning numbers in a group of TEs was in the Richard Caster/Jerome Barkum period in the early 1970s. Then there was the third-round drafting of Jeremy Ruckert, a Long Islander who used to attend Jets training camp practices at Hofstra. But more than that, he's an accomplished TE blocker/catcher that draft analysts such as The Athletic's Dane Brugler love for the Jets, saying, "He offered too much value to pass up in the third round." I hate losing Ryan Griffin's toughness and optimized production and I feel like we never got to see Tyler Kroft at his best. But this is the NFL. The Jets have upgraded that TE room like nobody's business. Will Trevon Wesco stay around? Can Kenny Yeboah carve out a niche for himself? If so, they'll be the better for working in this new room. And we know Zach Wilson will benefit from having strong new blockers in the run game and hot new options alongside his WRs in the pass game.