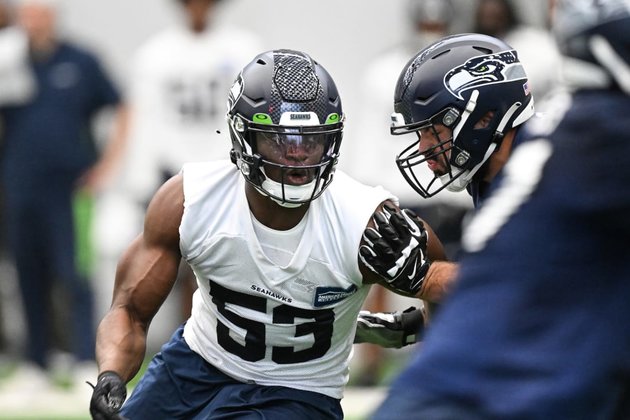 Notes and observations from the second day of Seahawks rookie minicamp. John Boyle

Seahawks rookies and tryout players were back on the field Saturday for the second day of rookie minicamp, after which the media heard from five players, Seattle's picks in Rounds 4-7. Here are some highlights from those sessions with the media, as well as the day's on-field work.

1. Wearing No. 8 for his namesake, Coby Bryant looks comfortable in Seattle's secondary.

After wearing No. 7 for most of his career at Cincinnati, Coby Bryant, who was named for the late NBA star Kobe Bryant, switched to 8 for his team's Bowl Game last season, then came to Seattle hoping to carry on that tradition. And sure enough, Bryant has been wearing that number this week during minicamp, and more important than feeling good about the number on his jersey, Bryant is starting to feel comfortable playing in the Seahawks defense.

Working mostly at left cornerback so far in minicamp, Bryant says what the Seahawks are asking of him suits him well both in terms of technique, and perhaps most importantly, in philosophy.

"Competing, that's the biggest thing I've picked up on from coach (Pete) Carroll is to compete, and that's exactly what we did at Cincinnati, having the two best corners," said Bryant, who shared a secondary with No. 4 overall pick Ahmad Gardner. "Just going up and competing and that's just the philosophy here is to compete and that's what I do and that's what I love to do."

Bryant said a lot of the terminology and scheme Seattle runs are similar to what he did in college, noting, "I picked up in quite fast. Hopefully Coach Carroll and Coach (Karl) Scott can see that for themselves."

Bryant also has familiarity with he kick-step technique Seattle asks its corners to use when they're playing press coverage.

"That's what we did at Cincinnati as well, so I'm extremely familiar with it, so now it's all about taking to the next level and just being that dominant corner that hopefully I can be and that I pride myself on being," he said.

2. Though sidelined with a minor hamstring injury cornerback Tariq Woolen is still learning this weekend.

"I've just been taking a lot of mental reps, because that's just as important as the physical reps," Woolen said.

Most notably, Woolen spent a good amount of time Saturday getting some one-on-one attention from Carroll, who despite his role as head coach, still likes to go back to his days as a defensive back coach and do some hands-on work with cornerbacks, particularly rookies or those new to the team.

"Being coached by Coach Pete is a great thing," Woolen said. "Everyone knows the days with the Legion of Boom and the great secondary they had, so just being coached by him, I'm soaking in all the advice I can. That's what I'm trying to do."

3. Tyreke Smith is in a slightly different role, but he likes the change.

Tyreke Smith, a fifth-round pick out of Ohio State, mostly played a traditional defensive end role in college, but getting ready for the draft, he prepared to play both that position and outside linebacker, knowing that depending on where he ended up, his role could look a little different than what he knew in college. And sure enough, Smith ended up in Seattle with a Seahawks defense that is transitioning to more of a 3-4 scheme, meaning its edge rushers will be outside linebackers rather than bigger defensive ends.

While new to him, that role of being asked to do more and play out of 2-point stance suits Smith, he said: "It's kind of different from what I was doing at Ohio State. Not really different, but I'm in more of a linebacker role here. I'm more in coverage... I kind of have more freedom, I kind of have more freedom, I can see more. So I like it, I like it better how Coach Carroll and the coaches have me playing here."

"Boye, when you see him, he's all smiles," Smith said. "He's just like me. I feel like we just instantly connected at the Senior Bowl when we were there. I feel like we had a connection because we made each other work hard and we both turned each other up in a way. Boye's my guy, I was happy to see him at the Combine and I was happy to see him again when we met up here."

4. Bo Melton has been preparing to be drafted for years.

Melton, a four-year starter at Rutgers, heard his name called in the seventh-round of this year's draft, but that wasn't his first experience with the NFL draft. When Melton was a senior in high school, his parents took him to Philadelphia for the NFL draft, and for fun he went through some of the drills they had set up for fan participation.

Unlike the vast majority of fans who do such drills, however, Melton is now wearing an NFL uniform having been selected in the draft.

"My mom and my pops took me to the 2017 NFL draft in Philly," he said. "My dream was to be in the NFL, so when I was out there, they were doing drills-they were doing 40-yard dashes, they were doing verticals-so I was like, 'I'm going to try this. I want to be that type of guy.' So I just did it at the time and had fun with it."

From Doug Baldwin to Jermaine Kearse to David Moore to Freddie Swain, the Seahawks have a strong history of late-round or undrafted receivers making their name on special teams before taking on bigger roles on offense, and Melton, who was a special teams standout in college, is ready to do whatever is asked of him in that phase of the game in Seattle.

Melton said at Rutgers he was on "Punt return, kick return, I played gunner. Being versatile, being able to be used on every spot, especially on special teams, you want to learn the special teams scheme, you want to being the meetings, you want to come out here and get extra work on it. Just being involved is going to help."

5. In addition to being a great athlete, Dareke Young is both smart at practical.

After graduating from Lenoir-Rhyne with a degree in engineering physics, seventh-round pick Dareke Young then began pursuing his MBA last year, though for now he's putting that on hold for football with two semesters still to go. The reason Young takes his academics so seriously?

"After I'm done with football, I want to be a mechanical engineer for a car company," said Young.

Since Young said he grew up being hands on with cars, he was asked what his dream car would be. Without hesitating, Young delivered the line of the day, saying, "As of right now with the gas prices, I'm going to have to go with a Tesla."

One reason Young likely took his academics so seriously is that for most Division-II football players, the NFL isn't a realistic goal. But after seeing former teammate Kyle Dugger get selected in the second-round of the 2022 draft and having interactions with the scouts who initially came to Lenoir-Rhyne to scout Dugger, Young realized he might have a real shot at making the NFL.

"Just seeing my teammate Kyle Dugger go through his process, scouts coming in and seeing him, then also talking to me," he said. "After he left, they kept coming back. That's pretty much how my name got out there. Just him going through his process motivated me more to get to this level."