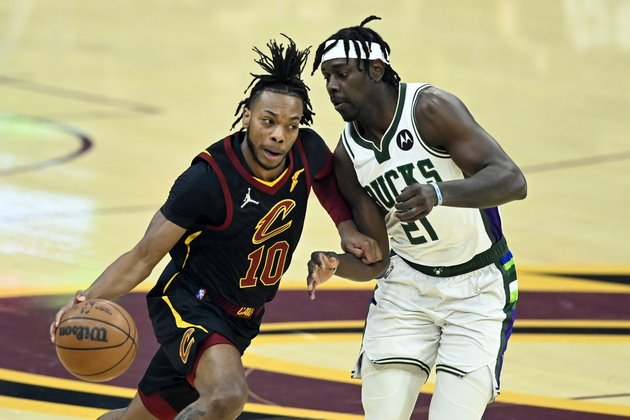 Kevin Love and Cedi Osman scored 25 and 23 points off the bench, respectively, to lift the host Cleveland Cavaliers to a 115-99 victory over the Milwaukee Bucks on Wednesday.

Love, who also grabbed nine rebounds, sank five 3-pointers, and Osman added six more from beyond the arc. Osman entered the contest having made just 1 of 20 attempts from 3-point range over his previous five games.

Osman had a team-high 23 points in Cleveland's 119-90 win at Milwaukee on Dec. 18. The Cavaliers have won two of the three meetings between the teams this season.

Cleveland's Darius Garland celebrated his 22nd birthday by collecting 19 points and eight assists. He appeared to tweak his back after converting a reverse layup in the third quarter before returning to the court to begin the fourth.

Rookie Evan Mobley had 16 points and seven rebounds for the Cavaliers, who shot 45.2 percent (19 of 42) from 3-point range to record their third straight win and their eighth in the past nine games.

Milwaukee's Giannis Antetokounmpo had 26 points and nine rebounds in his return from a one-game absence caused by right knee soreness.

Bobby Portis scored 22 points and Khris Middleton chipped in 21 for the Bucks, who made six of their first seven 3-pointers before going 3 of 25 from beyond the arc for the rest of the game. As a result, Milwaukee saw its three-game winning streak come to a halt.

The Bucks bolted out of the blocks quickly, making 14 of their 19 shots from the floor to secure a 35-26 lead after the first quarter.

Cleveland bounced back to outscore Milwaukee by a 39-22 margin in the second quarter and take a 65-57 advantage into halftime.

The Cavaliers kept the pressure on with an 11-2 run to start the third quarter, with Garland, Mobley and Dean Wade each making a 3-pointer. Cleveland made another strong push to extend its lead to 95-77 by the end of the quarter.

Love sank a long and a 3-pointer to push the Cavaliers' lead to 101-81 early in the fourth quarter. The hosts were never threatened the rest of the way.