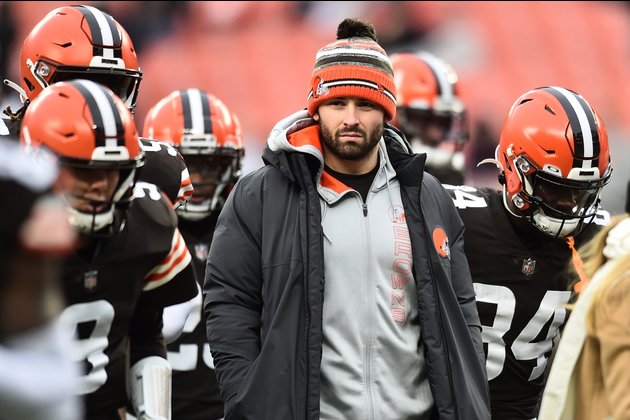 He made the announcement Tuesday night in an Instagram story.

"Getting off all social media for the foreseeable future," the 26-year-old Mayfield wrote. "Gotta do what's best to focus on me, my family and loved ones. Appreciate all the support. Time to get right."

Mayfield recently underwent surgery to repair a torn labrum in his non-throwing left shoulder that hampered him much of the season. A week ago, he posted a video to Instagram saying the surgery "went great" and that he'd be working hard in his rehabilitation.

"It's one of these steps to get back to my true self," he said. "This past year hasn't been very easy. A lot of stuff has gone down and it wasn't easy for me or my family."

Just three days ago, after commenting on Sunday's football playoff games on Twitter, he alluded to his pending social media sidestep.

"Nevertheless... social media is toxic. Always kept my circle tight," he wrote. "Time to get back to that. Family and loved ones only."

Mayfield took a heap of negative comments on social media for his play this season as the Browns, a preseason darling, finished tied for last place in the AFC North. They saw themselves eclipsed in the state of Ohio by the Cincinnati Bengals and quarterback Joe Burrow, who will lead his team in the AFC title game on Sunday against the Kansas City Chiefs.

FanDuel picked the Browns as 1600 favorites to win the Super Bowl and the Bengals near last in the NFL at 12000.

While also playing through a knee injury, Mayfield posted the lowest totals in his four-year career in completions (253), yards (3,010) and touchdowns (17). He threw 13 interceptions and was 6-8 as a starter, missing three games.

The Browns finished 8-9 on the season.

The Browns picked up Mayfield's fifth-year option but have yet to commit to an extension.