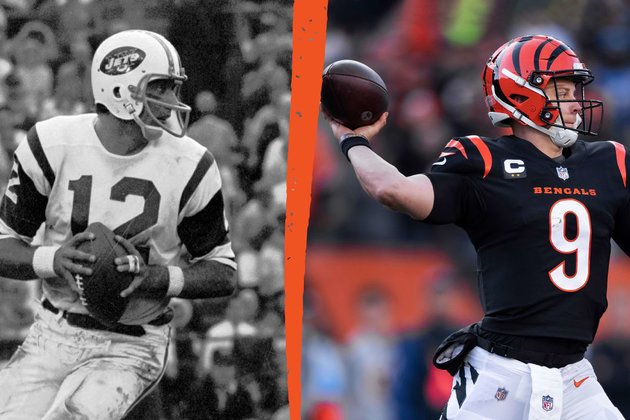 Namath and Burrow: The First Joe Cool Is Watching The Next

With Joe Burrow becoming one of the youngest quarterbacks since the merger to ever lead a team into an NFL conference championship game Sunday (3 p.m.-Cincinnati's Local 12) in Kansas City, now is a good time to remember that it is the Joe Namath Merger.

His three-year, $427,000 unreal contract with the Jets signed on the second day of 1965 forced the NFL to merge with the American Football League. Four years later his even more outrageous guarantee and surreal play with moxie and mien validated it when the AFL Jets did the unthinkable and beat the untouchable NFL Colts in Super Bowl III.

This past weekend, that old Bengals nemesis Terry Bradshaw compared Burrow to Namath and it wasn't because of numbers or completion percentages or stats spit out of Bunsen burners. It is because of their pure audacity to lead their teammates to heights unknown and transform hope to headlines with their arm and charisma.

They both came out of the SEC, northern imports who left southern legends and went No. 1 overall (Namath to the upstart AFL, Burrow to the startup Bengals), bad knee and all.

Joe Willie Namath gets it, too, and here is his take on Joe Lee Burrow and his Bengals. Namath, the man who invented modern NFL magic, thinks Burrow can pull out some more.

"I'm not pulling against KC at all. Not at all. But I would love to see Cincinnati win," says Namath this week from his Florida home. "I pull for underdogs most of the time and they are certainly going to be underdogs and justifiably so against that bunch from KC. But I do know underdogs can win."

Burrow may be rebelling against the underdog thing, but he has to love that coming from the eternal underdog who spawned what we have today with Wild Card Weekends, Divisional Matchups and Championship Sundays.

"Oh man. I tell you," Namath says. "I first picked up on him early when he went to LSU and I started paying attention with the success this guy was having.

"I related somewhat early on to his going down there to LSU, I was scratching my head. How does a guy from Ohio and Ohio State go down to LSU? How did he find that? Of course watching him play at Alabama, I was very impressed with him as a collegian."

Just like Burrow ended up at LSU. Alabama came to Beaver Falls, Pa. and got him.

Burrow has announced himself this past month with a historic five-game winning streak, but Namath has been watching long before.

"First of all, I liked his passing abilities," Namath says. "I liked his physical movement. He's smooth, you see. I couldn't tell he was as big as he is, 6-4. I just liked the way he moved around from one place to the other under control. He was very impressive at LSU and watching him grow at this early stage, man, it just tickles me."

Then there's that Joe Cool.

"Composed. Very collected, His focus is on the job," Namath says. "But that doesn't mean he can't get fired up and get in somebody's face, especially an opponent."

You don't have to ask Namath about Cincinnati. He'll offer he still sees Jets head coach Weeb Ewbank talking to Bengals head coach Paul Brown at midfield and Ewbank calling him over.

Quite a meeting. If Brown gave the NFL its classroom and rules, Namath gave the league its rock star. Quite a merger.

"I can still see Nippert Stadium in my mind's eye," Namath says. "I had the honor of meeting Paul Brown. Knowing his history, that was a big thrill. Home of the Cincinnati Bearcats. And I guess it still is."

That season after the Jets won the Super Bowl, they played at Nippert in 1969 and the Bengals had a rookie quarterback dubbed "The Joe Namath of the Midwest." Greg Cook won the last AFL passing title, not Namath, but a shoulder injury made it his only season. By the time Namath threw for a touchdown in the Jets' 21-7 victory over the Bengals on Oct. 12, Cook had already hurt his throwing shoulder and completed just four of nine passes that day before getting lifted for Sam Wyche.

"That name hasn't come up in a good while, but yes I do (remember)," Namath says. "Was it a shoulder? It's a tough game. Look at the playoff games we're looking at now. Lady Luck can play a role."

Like the rest of us, Namath has been mesmerized by last weekend's divisional histrionics.

"Any given day," Namath says. "These guys are all so good. The guys playing today, and the coaches, too. Boy, man has learned more from their predecessors and the game is so good today. These guys are bigger, stronger, faster. They work at it year round. I know Cincinnati can win the game."

Namath knows the Bengals already beat the Chiefs a few weeks ago. And he knows the Chiefs know. Namath was 25 when they beat the Raiders in the 1968 AFC title game, the forerunner to Sunday's game. Burrow turned 25 last month.

"Those guys have already played. KC knows what can happen," Namath says. "They can be had. They've been had a handful of times this season.

"Watching (Burrow) in college and the way he's matured, he can play. He can flat out play," Namath says. "I just know he's going to continue to grow with more experience, too. It's been good so far playing big-time ball, I can only seem him continuing. If Lady Luck keeps him safe, he's going to be around and sensational for a long time."

Namath is going to do what we're all doing Sunday.

"It's the best football of the year. Anybody can beat the other one," says Namath, who did it once and started it all.