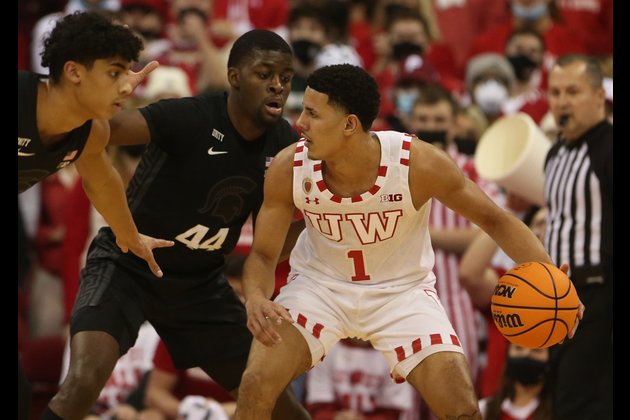 Wisconsin coach Greg Gard said he knew Badgers guard Johnny Davis was poised for a breakout sophomore season after watching him play in the FIBA U19 World Cup over the offseason.

Any astute bettors who forecast Davis leading the player of the year conversation come January stand to receive a handsome return on their investment.

After averaging 7.0 points as the sixth man as a freshman on a senior-laden team last season, Davis wasn't on the preseason board for the Wooden Award at BetMGM. That quickly changed as it became clear that Davis had become Wisconsin's star, leading the Badgers with an average of 22.3 points per game.

Davis took over as the 500 betting favorite this week, jumping past the likes of Kansas' Ochai Agbaji (700) and Gonzaga's Drew Timme, Kentucky's Oscar Tshiebwe and Illinois' Kofi Cockburn, who are each being offered at 800. Duke freshman Paolo Banchero also remains in the hunt at 900.

Timme and Banchero opened as co-favorites at 700, and Timme still tops the markets at BetMGM with 10.7 percent of the total bets and 9.9. percent of the money wagered on the Wooden Award backing him. Davis is being backed by 6.8 and 8.7 percent, respectively, but that's mostly because he wasn't even being offered as a choice when the market opened.

By contrast, Purdue's Jaden Ivey is second at the sportsbook with 9.9 percent of the bets backing him despite Ivey's odds lengthening from 2500 to 3000 during the season. Timme's teammate, freshman Chet Holmgren, has slid from 900 to open the season to 6600.

Despite Davis' rapid ascent, plenty of basketball remains to be played. He is also adjusting to being the primary focus of every opponent during the grueling Big Ten schedule.

"Teams are just trying to be more physical with me," Davis told reporters last week. "Put more size and length on me to try to take away all my pullups. If they're going to do that and pursue me so hard, then I think I'm going to be able to get my teammates better looks."

The 6-foot-5 Davis did dish four assists against the Spartans -- his fifth game of the 16 he has played this season with at least four.

"I'm sure he's risen to the top of scouting reports," Gard said, per the Wisconsin State Journal. "I think he's earned that. That comes with the territory of being a very good player. You're going to get a lot of attention.

"They're going to have different philosophies to try to stop you, to try to slow you down. Being more physical and sending more guys toward you. ... You try to add layers to your game as an offensive player, but defensively, he has gotten a lot more attention and it's not surprising."