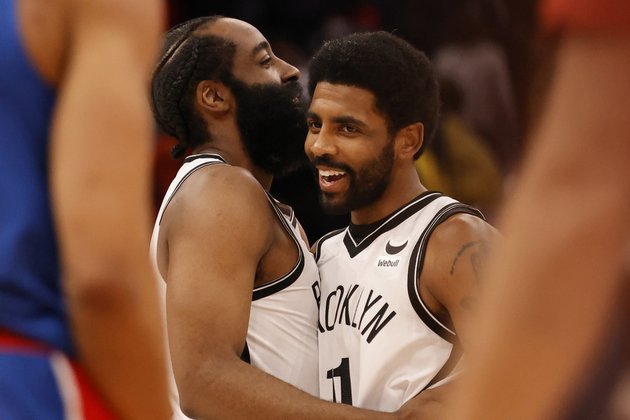 The Brooklyn Nets are 2 for 3 when it comes to being able to survive the absence of Kevin Durant.

Their last win came courtesy of a barrage from their part-time backcourt duo of James Harden and Kyrie Irving. The Nets hope to get another big performance from Harden and Irving and get their thirdstraight win Sunday night when they visit the Minnesota Timberwolves.

Durant sprained the medial collateral ligament in his left knee in a 120-105 home win over the New Orleans Pelicans on Jan. 15.

They absorbed a seven-point loss in Cleveland on Monday when Harden and Irving combined for 49 points and eked out a one-point win in Washington when the duo combined for 48 points.

Harden posted a triple-double with 37 points, 11 assists and 10 rebounds, and Irving finished with 24 points. It was the duo's most combined points since Irving made his season debut Jan. 5 in Indiana.

However, those opportunities are limited since the unvaccinated Irving is only eligible to play road games that are not against the Knicks, Warriors and Raptors.

"He's capable of doing that, man, at any moment, at any point in the game," Harden said. "And that's one of the reasons we need him every single game."

Minnesota is 6-3 in its past nine games, but it is coming off a frustrating 134-122 loss in Atlanta on Wednesday. On Tuesday, the Timberwolves survived blowing a 12-point lead and allowing 40 points in the third quarter of a 112-110 win at New York, but it encountered difficulties in the third again on Wednesday.

Minnesota held a 16-point lead after producing a 42-point opening quarter. But the Wolves allowed 45 points in the third and were outscored 73-49 after halftime, when they allowed Trae Young to score 23 of his 37 points.

Anthony Edwards scored 20 points but was ejected in the disastrous third quarter after not getting a foul call to go his way. Karl-Anthony Towns finished with 17 points and had a basket waved off when he was called for a flagrant foul.

D'Angelo Russell led the Timberwolves with 31 points and also seemed to think Wednesday's loss was a teachable moment.

"When adversity sets in, we're either going to go about it the right way or let it roll over and affect us the next play and the next play, and the next guy's mad," Russell said. "It's just a contagious domino effect. I think that's where we got to be better."

The Nets have won the past three meetings, including a 127-97 rout in Minnesota last April when they made 15 3-pointers.