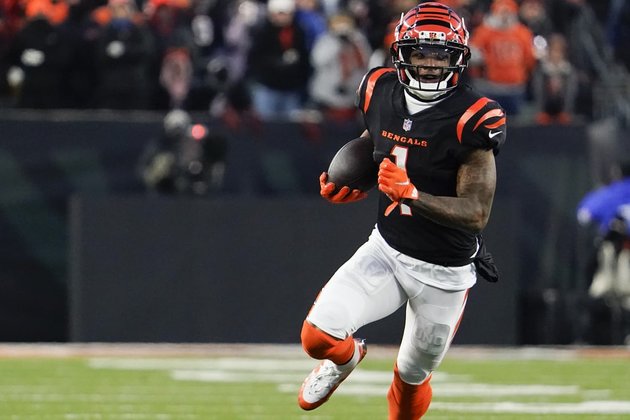 Matchup Of The Game: Bengals' Air Show Vs. Titans' Radar

It's pretty clear what is shaping up in Saturday's AFC Divisional (4:30 p.m.-Cincinnati's Local 12) for the Bengals' biggest road trip since they moved from Spinney Field to Mehring Way.

It is Cincinnati's historic aerial show piloted by Burrow, their generational quarterback, against one of the game's bright young coaches, Titans head man Mike Vrabel and his playoff-tested throwback style of crop dusting and stingy defense of the soil.

Both are products of first-in-flight Ohio and the winner jets into next week's AFC championship game. Akron's Vrabel already landed there at age 44 two years ago, the same season Athens' Burrow re-wrote the NCAA record book with Chase at LSU.

Since it's a playoff game, the sub-plots meander like an ancient underground city.

Titans big back Derrick Henry (foot), who is averaging the second most rushing yards in at least five postseason games in the last 50 years, puts a scare into Bengaldom as he tries to play for the first time since Halloween. It pits two of the monster backs in the league. Before Henry got hurt in his eighth game this season, he was leading the NFL with 849 yards after contact and the Bengals' Joe Mixon was second with 500.

Byard, only one of three players in the league this season to have a pick-six and a fumble return for a touchdown, comes in with 23 career interceptions, in the top ten among active leaders. Throw in cornerback Jackrabbit Jenkins' 27 and that's an even 50 to test Burrow's streak of 180 straight passes without an interception that stretches all the way back to Dec. 5 and the desperate fourth quarter against the Chargers.

Titans quarterback Ryan Tannehill, who worked under Bengals head coach Zac Taylor (another rising young coach looking to make a title game at age 38) in college and the pros, is just as careful with the ball. But his throws average nearly two yards fewer than Burrow's best in-the-NFL 8.9 yards per attempt.

And then there's Chase, everyone's rookie of the year, going against Fulton, his old high school teammate at Archbishop Rummel in New Orleans and college teammate at LSU. Burrow (overall No. 1) and Fulton (61st) came out of Baton Rouge in the 2020 draft.

Chase, the overall fifth pick, came out this year and has broken the NFL's Next Gen Stats computer. His seven deep touchdown catches set the Next Gen Stats era rookie record in becoming the first rookie in the NGS era to lead the NFL in touchdowns on deep passes over the entire season.

Fulton's Titans allowed seven deep TDs this season (sixth most in the NFL), but Burrow doesn't see much of an edge from familiarity.

"It's tough. Different styles of defense and after two years, it's kind of different worlds. I would think it would be more of an advantage for the receiver," Burrow says. "(Fulton) is very tough. He's physical. He's a downhill guy that likes to tackle and he's fast."

Kevin Coyle, who coached the Bengals secondary for 13 seasons before joining LSU as a defensive analyst, has a unique perspective for this one as the 6-foot, 201-pound Chase goes against the 5-11, 197-pound Fulton. He saw it every day in practice, where most of the time Chase actually matched up against Derek Stingley, Jr.

"Kristian is a good player. Good kid, he's fast and he finished his career in college with a real solid year," Coyle says. "I haven't followed him closely since he's been in the league. I know he got nicked up a little early in his career, but it's good to see him out there. It's going to be fun to watch."

It's also going to be fun to listen to. Chase doesn't always talk on the field. But Saturday is special.

Chase says he and Fulton haven't texted or talked this week and he doesn't plan to. He says they connect once in a while during the season, but they usually spend some time together in the offseason back home in New Orleans. They also ran track together, but there was no pact to go to Baton Rouge together. They made the decision separately.

"He's a patient corner. He's got good feet, too," says Chase, but he expects to see a lot more than just Fulton.

In their last two games, Burrow and Chase have confounded man-to-man coverage, (Burrow has thrown six TDs, no picks on 9.5 yards per throw while Chase has 20 catches for 382 yards on 19.1 yards per catch) and Chase knows exactly what's next.

Just think of this. If he matches last week's 116 yards, he'll have as many career playoff yards as A.J. Green, third on the Bengals' all-time list.

"I think we're going to see a little bit of everything this week," Chase says. "Getting doubled. Cloud. Zone."

But the Next Gen Stats say Burrow has not been just a long-ball thrower. His 156.8 passer rating on intermediate passes (10-19 air yards) since Week 7 is the highest in the NFL during span, and would be the highest for a full season in the Next Gen Stats era, including playoffs. Plus, Burrow to slot receiver Tyler Boyd is the duo with a perfect passer rating on intermediate passes since Week 7.

And Tee Higgins, Chase's partner on the outside, has also been a reliable intermediate threat for Burrow since week seven. Burrow-Higgins ranks second behind only Burrow-Boyd among all duos in completion percentage on throws between 10 and 19 yards.

While the Titans are very good against the run (fifth), they are in the bottom 10 in pass defense. But they are top 10 against intermediate passes, where Fulton's 26.3 percent ball-hawk rate as the nearest defender on intermediate passes ranks ninth among cornerbacks.

What's it all mean? Kevin Coyle is going to pull up a chair and his crystal ball and watch. Remember what he told Bengals.com about Chase a month before the draft?

"He'll block. He'll knock the crap out of a safety. He'll lock up a corner. He's not afraid to get his nose dirty. You could put him at running back to get the ball in his hands. Pound for pound he's one of the strongest players on the team. Clearly he's one of the top players coming out in the draft ... There's nothing he can't do."

Coyle also predicted great chemistry with Burrow. So as a former Bengal, he's been enjoying the ride, too.

"I'm real happy for Mike Brown and the city," Coyle says. "They've stuck with them through some tough times. It's been great to see the highlights. Those two guys, they've been making it happen together for a while now."